The carpet on the stairs had to go when we moved, and after it had all been ripped off, the path of finding out how to finish side of stairs began. The whole ensemble of stairs looked like a blank space and it could turn into different styles of stairs.

Deciding on how to finish side of stairs, the realization hit, there is more than one side of a stair. Besides the part, you step on, and the side that holds the steps, the edges also have to be dressed, and gaps hidden. This whole project took some trial and error.

How To Finish Side Of Stairs With Stair Treads?

The steps only had wood decking which had to be dressed with stair treads that looked more elegant. Measuring them was the first step, to know how many stair treads and risers would be needed. This was helpful at the store as they sawed the pieces to size.

With all the treads cut, now began the process of staining and sealing. There were some other options of painting the treads with colored paint, making a colorful staircase. But the natural wood look made more sense and matched with the laminated flooring in the living room.

With the treads cleaned of any dust, the surface was prepped for staining. Using a foam brush I applied the stain and with only one coat the surface turned a dark oak color. It dried overnight, after which I applied the polyurethane seal. After leaving them to dry for a few hours, the treads were ready to use.

Assembling came next with glue to the back. Some techniques require the treads and risers to be cut at an angle, but having a longer tread was easier. It also helped a lot when gluing as the top part of the riser stuck nicely to the longer tread. The glue itself had to be spread in a wavy line for better adherence.

This continued up the stairs until it was time for the landing. This was a little tricky as it required more glue, and more attention to spread it evenly. Instead of applying the glue in one big wavy line, we applied it in multiple lines.

Some of the glue was pouring out from the sides, so a bit of cleaning after each application was needed. With excess material removed this part of finishing staircases was done. There was still the issue of tread gaps towards the wall and the side facing the living room.

How To Finish Side Of Stairs By Fitting A Skirting Board?

Everything got removed with the carpet, and that included the inner wall segments which hid and held the carpet. That piece needed to be replaced anyway so it only made sense to update it with a skirting board. The tricky part was cutting it to wrap around the stairs themselves.

There is quite an easy way to do this, albeit meticulous. Installed above the risers and treads, a straight skirt board is to be laid against the top and bottom corners. Enough space above and below is required for this to work properly, with the widest part of the skirting board lightly nailed against the wall. A wooden tool with one rounded edge will serve as a measuring tool called a scriber. The height of all the stair risers will thus be measured and inscribed on the skirting board. A nail through the scriber easily marks the board by scratching it. The bottom of the skirt can now be cut along the etched line.

After that, the skirt is placed back on the wall and the depth of the stairs is measured next. There can be an issue when risers, the parts you step on, have a little extra length. But this can also be measured and marked by simply resting the scriber horizontally against it.

After all that the outline of the stairs is now marked on the skirting board and once it’s cut it should neatly fit on the stairs. Nails will keep it tightly on the wall while finishing the staircases off by adding base caps and cove moldings.

Not all the stair risers were even and some had gaps at the junction with the riser. To solve this, I used some of the remaining glue and a putty knife to cover any noticeable gaps. After cleaning any remaining glue residue, the time had come for finishing stairs trim.

The old handrail that was in place before, had to be taken out to make room and not encumber the process. Since it was in good condition replacing it would have been wasteful. Instead, I used some of the remaining stain dye with some polyurethane seal and remodeled it. The outcome was not as dark as the treads but it contrasted nicely. 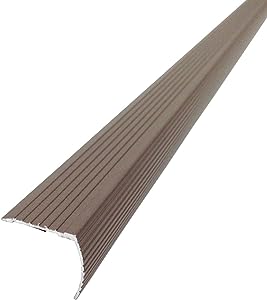 The more detailed part of how to finish side of stairs came when it was time for finishing stairs trim. With an open staircase, adding molding around the outside part of the stairs was a meticulous job. When deciding how to finish open side of stairs, measuring had to be done often and cutting in eagles to fit seamlessly with each other. This part was important not to skip as it hid visible gaps and nails.

The molding did not come in the same color as the stained treads. A little stain added later to the molding brought out a similar color to blend with one another. This small detail of adding molding gave a nice finished look to the staircase.

The whole project of how to finish side of stairs was challenging but absolutely worth it in the end. Every step came with new questions and solving them was very rewarding. Finishing staircases and adding personal touches or decorations can turn them into works of art, personalized to your home.

The staircase is an imposing feature in any house, especially an open staircase. After such a transformation the stairs now have a striking aesthetic that complements the living room. This new overhaul of the stairs will also maintain them for a while, which is a plus in the long run.